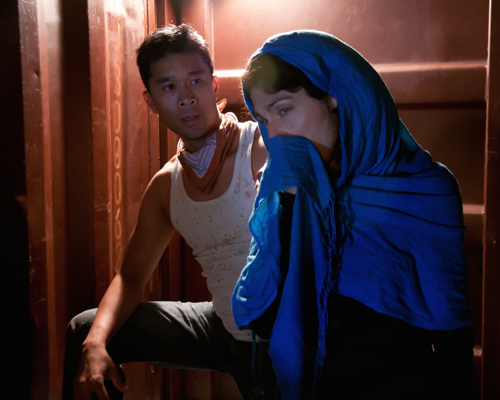 Five people thrown together by circumstance and necessity travel across Europe in the back of a truck. Should they trust each other? What price will they pay to complete their journey?

When the doors of the container shut behind you, let your eyes adjust as you meet five complex individuals: Fatima, Asha, Jemal, Ahmad and Mariam. You join them on the final leg of their voyage, as they are smuggled across Europe in the confined space of a shipping container. The only thing they have in common is their goal: to get to England and start a new life. Witness them torn between greed and generosity, watched over by the mysterious Agent who orchestrates their journey. With freedom so close, what price would you pay?

Clare Bayley’s provocative depiction of migrant smuggling won the Amnesty International Freedom of Expression Award for its unflinching and empathetic portrayal of the very human stories behind the statistics. Theatre Fix is proud to present the critically acclaimed Canadian premiere production, returning to Toronto for a limited engagement after its successful run at the 2014 SummerWorks Performance Festival.

This performance runs approximately 60 minutes. There is no intermission.

Warning: Confined space, dark, mature language and subject matter. THE CONTAINER is performed inside a restricted space that is neither accessible nor suitable for those with claustrophobia.

Theatre Fix engages under the terms of the INDIE 2.1, professional Artists who are members of Canadian Actors’ Equity Association.

Lynn Slotkin, CUIT 89.5 FM: “The writing is sharp. The acting is terrific. It’s a fine piece of unsettling theatre—the best kind of theatre”

✯✯✯✯ from Torontoist: One of “Our ten favourite things from SummerWorks” “The performances carried an emotional charge that made one wonder if a legitimate fight would actually erupt”

The Theatre Reader: “The immersive and site-specific components of The Container are top-notch” “A tense and poignant look at themes of trust and survival, and is definitely not one to miss”

Mooney on Theatre: “The most effective use of site-specific immersive theatre I’ve seen” “A gripping, raw and emotional experience. It’s thought-provoking political theatre that doesn’t proselytize”